Silent Carnival is the project of Marco Giambrone, a journey that began in 2012 and where drones, songwriting, fragile melodies, noise and silence combine and collide with one another in an intimate and sparse sonic landscape. Having already released two studio albums - seft-titled (2014) and Drowning At Low Tide (2016) - Silent Carnival is getting ready to release a new album this year. 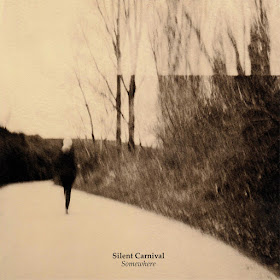 Somewhere is an album about visions, dreams and premonitions with many different vibes, widening the colour palette than in the past. Less drones and more acoustic instruments to dress a songwriting free from fences of music genre. Recorded between January and February 2018 in the home-studio based in Cammarata (Sicily), Somewhere confirms band members and constant collaborators Alfonso De Marco, Caterina Fede and Andrea Serrapiglio, adding new musicians like Stefano De Ponti, Luca Swanz Andriolo and Luca Serrapiglio.


In order to promote this new record, Silent Carnival is now releasing the new music video for "Arles", a track about a reflection on past, on places that mark and change our life. That brief moment when you try to relive a feeling, but finding only blurred images. The video was directed by Corrado Lorenzo Vasquez and it tell us in black and white the story of a girl living in her depressed beauty, in a solitude driven reality with a few glimpses of hope. You can watch the audiovisual work for "Arles" below.

Somewhere will be released on October 19, 2018 via Italian label Backwards Records and you can pre-order it here.